This joke does the rounds a bit too often: 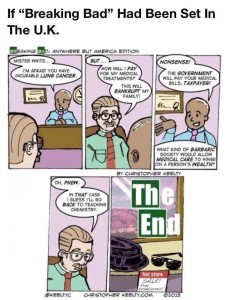 In the show, because Walter White is a salaried professional, his insurance covers the same procedures that national healthcare insurance schemes generally cover in the sensible world.

The nature of the extremely expensive experimental cancer treatment for which he needs the money isn’t specified in the show – but quite often, such a treatment wouldn’t be deemed cost-effective for funding by the UK NHS, Australian Medicare, or the Canadian, French or German systems either. Like many experimental treatments, it also quite likely wouldn’t have had any effect – which is why insurers and national healthcare systems alike are reluctant to provide funding outside of clinical trial groups.

Now, if someone unemployed or casually employed (ie almost everyone from the subculture Walt visits after heading out on the meth-making trip) had gotten sick, that would have been a story where the outcomes were actually different in the US and the rest of the world…