The UK’s New Economics Foundation, who style themselves as nef because that’s the sort of thing that was cool in 2003, are one of the worst think-tanks going [1].

With a couple of weeks to go before the 2015 General Election, they have jumped on the election news bandwagon. Their effort is well up to their normal standards of competence.

One of nef’s pet ideas has long been that the UK should have a mainland-European style electoral system, dropping member-represented constituencies in favour of party lists based on percentages of the national vote.

This isn’t a completely unreasonable thing to do. The UK first-past-the-post system tends to favour major parties and local parties, while discouraging nationally-supported minor parties.

Meanwhile, Labour and the Conservatives have historically tended to focus campaigns on battleground seats rather than seats where everyone is very poor or very rich.

However, the UK system also allows me as a voter in the constituency of Islington North to vote for a rebellious, anti-war, left-of-Labour MP like Jeremy Corbyn, rather than for whoever goes on the top half of a list of party sycophants to be rewarded with office for years of dedicated hackery.

And as someone who believes democracy is a means rather than an end, I rather like the way that the UK system mostly filters out Nazis and raving lunatics.

Since nef is composed of the kind of early-career wonks who would end up on the ‘rewards for dedicated hackery’ list, it is not surprising that their press release – as faithfully repeated by the Independent here – dwells entirely on the negatives of first-past-the-post, and compares it solely to a European-style list PR system, without stating any of its drawbacks or the alternative systems [4].

But as well as being framed in an absurdly biased way, the study is self-refuting. 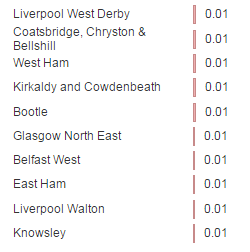 Here’s a list of the UK seats where, in nef’s opinion, voters’ opinion matters the least. According to nef’s analysis, voters in these 10 seats might as well stay home on polling day, because there is absolutely bugger all chance of their vote making a difference to man or beast.

To paraphrase Captain Blackadder, there is one tiny problem with this list: it is bollocks.

Of the ten seats on the list, two (Coatsbridge etc and Kirkcaldy etc) are currently predicted by Lord Ashcroft’s constituency-level opinion polls to change hands at the 2015 election from Labour to the SNP. A third (Glasgow North East) is predicted to remain Labour with a majority of only a few percentage points over the SNP. And a fourth (Belfast West) changed hands less than 20 years ago, as part of a major shift in the Northern Irish republican vote from the moderate SDLP to the, uh, less moderate [5] Sinn Féin.

I don’t know about you, but if I were putting out a press release to promote my brilliant study of electoral things, I’m not entirely sure that I’d include a table proving that it is utter nonsense.

Of course, all four of these cases were driven by a massive realignment in regional politics: the present annihilation of Scottish Labour in the wake of the independence referendum, and the previous annihilation of the moderate-but-inept-and-corrupt mainstream Northern Irish parties once the peace process was safely(ish) in place.

nef would probably argue that their methodology is still valid for the vast majority of safe seats in England and Wales – which, as for Labour’s lowland Scots seats, will be true until it isn’t.

Once an inflexion point is reached, FPTP systems deliver massive, immediate change – as seen most clearly in Canada at the 1993 election, where the ruling Progressive Conservatives [6] went from 154 seats to two. This kind of change is generally in line with the popular will, even if it doesn’t reflect the exact vote weightings of every single party on every single occasion.

When a party is wiped out under FPTP, that’s when the voters of Belfast West and Glasgow North West, of Canada’s Tory outer-suburban heartlands, get their say. It’s their say, not the say of the floating voters in the English Midlands, that is brutal and final. And it’s this pattern that nef’s analysis completely and utterly misses.

To miss FPTP’s potential for seismic shift might be forgivable, in most election campaigns. But as nef’s own data shows, it is happening in Scottish Labour’s weigh-the-vote seats right now, in this election. They’re either wilfully blind, or entirely stupid.

[1] nef’s policy solutions aren’t quite as wrong as those proposed by, say, the Taxpayers Alliance, but such groups are owned by rich crooks who  pay them to publish research lying that the government should give more money to rich crooks, so are wrong for reasons other than incompetence.

[2] The BNP claim they aren’t neo-Nazis, but they are lying.

[3] Thankfully, neo-Nazis don’t tend to agglomerate in specific areas to quite the extent that posh hippies do.

[5] Depending chiefly on how moderate you believe blowing things up and shooting people in the knees is.